Munch was four years old when Peer Gynt was written. He grew up and developed as an artist in a time influenced by Ibsen's literature and theatre plays. As literature was for Ibsen, the pictures for Munch were an exploration of the human mind. Theatre can create intense moments because the experience is there, now, throughout a play. Perhaps it’s not that strange that theatre would inspire Munch in his artwork. What he painted, drew or graphically portrayed, always had to touch something, a feeling, in him. Its obvious that many scenes from Ibsen's play were like this for him. He depicted situations and happenings from many of Ibsen's plays including "The Pretenders", "Ghosts", "Hedda Gabler", "John Gabriel Borkman" and "When We Dead Awaken" - and of course, "Peer Gynt".

Munch made several sketches and drawings of persons and scenes from Peer Gynt, most of them from the period 1906-1930. Many are loose sketches using fast lines of various qualities.

In 1896 Munch got an assignment to draw the program poster for the production of Peer Gynt at Lugné-Poe’s Théâtre de l’Oeuvre in Paris (1896). The motif he chose for the drawings were two women from the play; Solveig seen from behind on the side, and mother Aase with an almost intrusively close and weary face. Solveig looks inward in the picture towards a landscape of steep, snow-covered mountains, and with a little church that indicates a village.

This is not a coincidental motif. With these two women, Munch finds a theme he returns to again and again. It's especially visible in "Two women at the beach" (1898). Here, the old woman is dressed in black, and the mountains are replaced with ocean.

The young woman with the blond long hair, usually turned away, found in Munch's art, for example in "Detachment I and II "(1896) and "Young woman on the shore" (1896) could be pictures of Munch's deceased sister Sophie, who he grieved over throughout his life. Critics have written that the Solveig character in Peer Gynt awakened the Sophie-character in Munch's mind.

There are also several drawings of Anitra's dance, some with soft lines after the model Ingeborg Kaurin from 1911-15, and a couple from 1830, which are more bold and undressed.

Another important theme in Munch's drawings from Peer Gynt is Mother Åse's death. We can imagine that Peer with his fantasy and poetic talent who left his mother in poverty in his childhood home was also recognizable for Munch himself. Often Munch would draw his own face in the Peer Gynt characters.

Munch also painted portraits of Ibsen himself. Ibsen was 35 years older, and was an international celebrity at the time that Munch was establishing himself as an artist. They did not know each other personally. It is, however, known that Ibsen had sympathy for Munch, and supported him through a critical period of his career.

The Norwegian press and audience ridiculed Munch. It is documented that Ibsen, by now a Norwegian celebrity, made a simple gesture that helped change the public’s opinion of Munch. He saw the young Munch sitting at a table outside the Grand Café and went out of his way to sit with him. They exchanged a few pleasantwords before he left – the gesture was witnessed by many. This act left an indelible impression on Munch. Even more important was the meeting at Munch's exhibition at Blomquist on Karl Johan Street in 1895, which included Munch's "Frieze of Life" pictures. The exhibition was ridiculed in the Norwegian papers, and in "Studentersamfundet" the doctor Johan Scharffenberg stated that Munch was mentally ill. Ibsen chose to visit the exhibition, a visit that was even reported in French papers. He was shown around by Munch, took his time and showed interest and sympathy. It's also said that he told Munch: "It interests me a lot, believe me, it will be with you as with me, the more enemies the more friends." 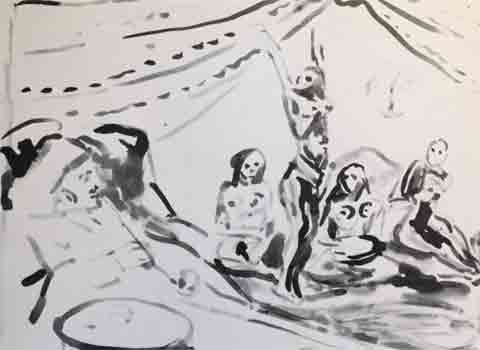 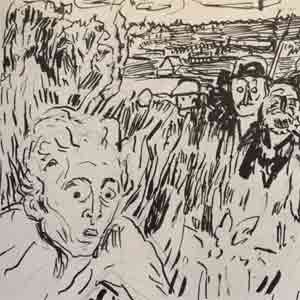 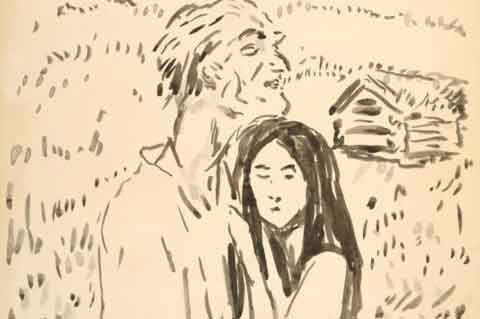