Our audiences laughed and gasped at the unexpected twists in 'Virus - a Fugue', the play by Norwegian playwright Fredrik Brattberg, which featured actors, puppets and a string ensemble in an oddly familiar dystopia.

This witty, absurdist one-act play was performed to 11 sell-out houses as part of the Nordic Noir program in December 2020 and March 2021. It was written by well-known Norwegian playwright Fredrik Brattberg and translated by May-Brit Akerholt, was a sensational, timely comment on fear of 'the other' in times of crisis. Our two actors performed with shadow puppets, hand puppets and eventually gigantic parade puppets. Our talented musical ensemble heightened the drama, repeating the fugue for each new protagonist.

The framework of the play is the conceit of four towns (with inhabitants) of decreasing size, contained like Russian dolls within each other. As each town becomes caught up in the repeated cycle of fear, humourous and eventually disturbing events re-occur. As Rita Bratovic of the Sydney Sentinal comments, the play makes "sharp, poignant comments about the fugal-style nature of disinformation and panic." 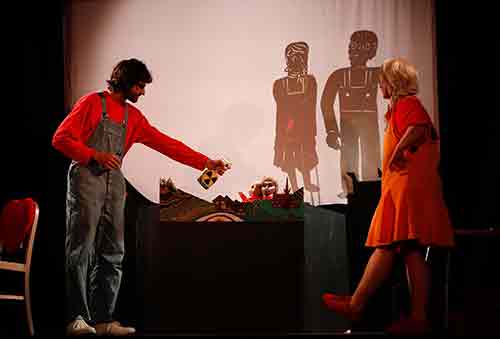 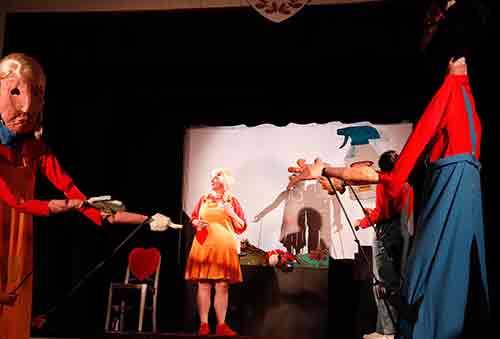 The play was built using the principles of musical composition. Short sentences and absurd situations are repeated with different variants as the play progresses - like the contrapuntal interweaving of parts in a fugue. A Bach fugue was literally the score for the unfolding events. Each town was identified by its signature musical instrument - viola for humans, first for violin hand puppets, second violin for shadow puppets, and the full ensemble for the giants.  The play was commissioned by the Czech and Slovak drama journal, Svet a divadlo, Jakub Škorpil, Editor.

What the reviewers said

"(The play in) Nordic Noir has you on the edge of your seat with simultaneous fear and excitement." What's On Sydney

"The play within a play works its magic."  - Sydney Morning Herald

What the audience said

"Last night blew me away. Congratulations!"

"... beautiful live music ... and those puppets were something else!" Fredrik Brattberg is both an author and composer. He is the third most produced living Norwegian playwright. His plays have been translated into almost twenty languages and staged in China, New York, Iceland, Denmark, France, Indonesia, Czech Republic, England and Norway. He won the Ibsen Award in 2012.

And then there were the puppets!

One paranoia-inducing event in ‘Virus-A Fugue’ was the appearance of potentially-infected small people in the model village - mini versions of the 'He' and 'She' actors.  Katie Williams (pictured), a NIDA-trained actor, puppeter, and puppet maker created the hand puppets. She has collaborated on projects for UK National Theatre, Warner Bros, Disney, and HBO, with her favourite to date being a Coldplay music video in collaboration with Aardman Animation. Our singers and dancers worked hard to become proficient shadow puppeteers in the course of the production. These eerie phantoms became the moving backdrop for the live action on stage and the puppet drama. In a nod to current events at the time, Donald Trump had the gigantic spray in the dramatic denouement of the play. then came the giants ...

The climax of the play was the appearance of the largest 'He' and 'She' puppet inhabitants, as reason and proportion are finally overrun by rumour and panic in the model village. Our lovely pianist Stephanie and volunteer Justin mastered the manipulation of these 4 metre 'gigantes', which are a feature of street festivals from Spain to Cambodia. Experienced street puppeter Emmy Collins (pictured seated on floor alongside a giant head below) was instrumental in bringing these huge puppets to life. Eventually these overwhelming figures bring an end to the humans.